This cover is customers’ favorite from the Hobonichi Techo 2017 edition.

This cover features a pattern based on the box art from the game’s original Super Famicom release in 1994. (Western audiences knowthe game as EarthBound, which was released for the Super Nintendo in 1995.)

According to the game’s creator, Hobonichi’s Shigesato Itoi, the MOTHER series’ bright red boxes, with their gold and silver logos, weremodeled after Japanese chocolate bar packaging.

The cover’s interior and bookmarks are both black, to set off the red exterior. The interior is also printed with the MOTHER 2 logo in white.

MOTHER 2 was released in Japan on August 27th, 1994. 22 years later, the game’s box makes its comeback on a Hobonichi Techo cover.

This cover includes a large Mr. Saturn sticker as a free bonus. The sticker has strong, fade-resistant colors, and the material lightly repels water, making it perfect to apply to durable items like suitcases.

In addition to protecting your cover from wear and tear, the Cover on Cover is a great place to store postcards, pictures, and other decorations.

*Please note that the Cover on Cover accompanying these items come with an inscription reading 2017. 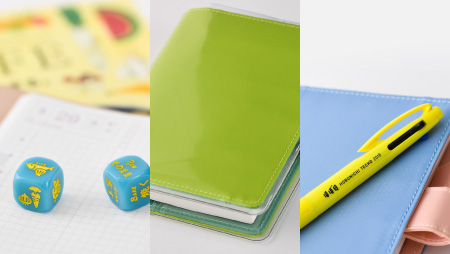 All covers are hand-made and may contain slight variances

Each and every cover is individually sewn by a factory worker hand-operating a sewing machine. Best efforts are made to ensure consistent sizes and specifications, but there may be slight differences.

Silk printed image may peel off over time

The logo and illustrations inside the cover are silk-printed onto the cover’s material. This delicate print may peel or come off with daily use. If using a Cover on Cover, the silk print may stick to the plastic and eventually come off with it from the constant contact.

During the print process, patterns may contain spots where the color has become smudged or uneven.

The design is printed over white material, so the sewing process may expose white areas around the stitches.

Interior of cover may be loose

The interior of the cover may not be perfectly taut due to limitations during the manufacturing process.

Pens with rubber, non-slip grips may be difficult to slide into the pen holder.

The pen holder is designed to perfectly fit the 12.2mm (0.48”) diameter Jetstream pen offered as a free bonus gift with select Japanese-version Hobonichi Web Shop products. Pens with certain shapes and materials may be difficult to pull through the holder. The holder can fit pens up to 13.5mm (0.53”) in diameter.

Due to an increase in material costs and other unavoidable factors, starting with the 2017-edition, it has become difficult to maintain the usual price of our Colors and Faux Fabric covers. In order to maintain the price of the covers, we will be offering these covers at the usual price when bought as a set with the Hobonichi Techo book. We apologize for the trouble, but when ordering the cover without a book, we will not be able to keep that price, so Cover Only orders will cost slightly more. Please add to your cart as a “Book & Cover set” to keep the cover’s lower price.

Color may vary slightly based on viewing screen

The color of the product may be slightly different in actuality than compared to how it appeared on a computer or smartphone screen.

Save and Continue Shopping

*Please note, these exchange rate estimates based on Xurrency.com are intended as a guide only. The actual rate for your order may differ, as exchange rates change constantly, and international purchase costs vary by credit card.